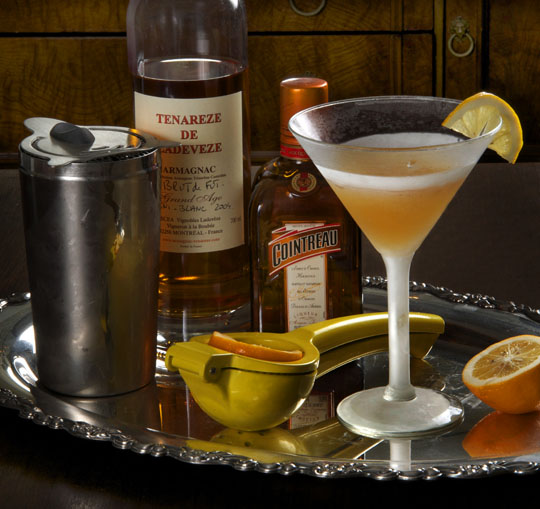 Some cocktails seem worthy of making based on the name alone, regardless of what’s in them. Since reading that there was a cocktail called a Sidecar 20 years ago, I’ve wanted to make one. But the brandy threw me off. Brandy is an after-dinner sipper, not a mixer. And if it’s just brandy, rather than Cognac, why bother at all? And if it is Cognac, why mix it?

But damned if the Sidecar didn’t keep itchin’ at my heart, wanting to be scratched. I loved it for its simplicity, 2 parts brandy, 1 part orange liqueur (such as Cointreau), 1 part lemon juice (which seemed like a lot of lemon—¼ lemon juice).

I happened to be shopping at a good independent grocery store here in Cleveland called Heinen’s, and they had a basket of Meyer lemons, which I’d never seen in a grocery store before, so I bought some.

On Wednesday, considering the return of the Friday Cocktail Hour, and with the Sidecar still a itchin’, I remembered the lemon. Meyer lemons are a little less acidic, a little gentler, with a lemon-orange aroma, which might sync nicely with the Cointreau, I mused, stroking my imaginary mixologist’s beard.

But the brandy. If we’re going to do this, I thought, let’s do this right. Donna and I had returned in August from Southwestern France with a bottle of Gascony’s very special brandy, Armagnac, the best of which are almost always produced by small family vineyards (unlike the big Cognac houses). I had bought mine from from a gentleman named Alexander Ladevese, a 2004 vintage made from ugni blanc grapes, one of the main Armagnac grapes.

The sidecar is very much a sour drink, which I think balances the intensity of the brandy. I’m sticking to the traditional proportions, but it’s a matter of taste. Add a little more Cointreau, use the even sweeter Grand Marnier, or add a splash of simple syrup or fresh orange juice to reduce the pucker factor. It lends itself to variations, such as the Ritz Sidecar. It’s up to you. Be prepared to adjust to your sweet-sour liking.

This is a lovely fall cocktail. At last, a Sidecar.

Serves 1 (can be doubled, tripled, quadrupled as needed)

This can serve one or two.