Announcing the first episode of my Le Creuset Technique series!

In December, in Charleston, South Carolina, while promoting my book, Ruhlman’s Twenty, I met Will Copenhaver and Grimsley Matkov, from the Marketing Communications team at Le Creuset US. They loved my book (and the many photos of the food we cooked in Le Creuset products, which Donna shot). I told them I love Le Creuset, it’s the best stuff on the market, that’s why we use it.

A month later, while cooking in Key West (brought my 7-quart Le Creuset French oven along with other tools, bien sûr), a colleague of mine, Warren Johnson, of Taste Five Media in Charleston, asked if I’d consider working with Le Creuset. I told him nothing would please me more, and Warren got to work.

Le Creuset wanted to teach people how easy great home-cooking can be AND give away tons of cookware, arguably the best cookware on the planet (certainly none better). Would I come to Charleston to demo some of these pots and pans?

Eat, drink, and cook for a weekend in Charleston, South Carolina? Well, OK, if you insist. (It's a charmed life.)

We’ve put together six technique videos because I care about cooking, and having the right tools makes the cooking easier. They get to promote and give away their products. I get to cook! Here's the first one: Baking great bread at home.

It's a fabulous technique. So many people use this method now, Le Creuset designed for its lid a special knob that can withstand oven temps up to 500˚F. For this episode alone, Le Creuset is giving away ten, that's TEN, 7.25-quart round French Ovens, the vessel I use to make my own bread. (These are $300 pots, folks; well worth it, and they last for generations.) Read the recipe below or on the Le Creuset site before baking (note that you need to remove the lid halfway through the baking so that the crust gets that beautiful crisp golden brown).

Each of the six episodes focuses on a particular technique, matched with one of their fabulous vessels to suit. 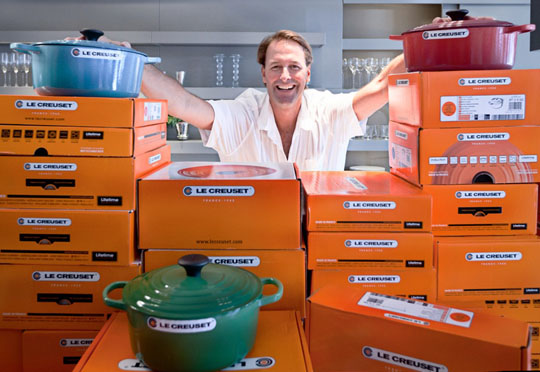 The succinct entry form on this page has an optional box, asking for a cooking story, a cooking tip, a cooking nightmare. We don’t know what we’re going to do with what you write (have to see what we get), but I and Will and Grimsley at Le Creuset know that cooking is not a solitary activity, we do it as families (I hope!), we do it with friends, we do it in communities. Food and story bind us together and keep us connected. And nourished. And healthy. And happy. Hope you’ll share a story, a recipe, a technique.

Like my pal Nathan—a New York transplant but die-hard Browns fan, bless him—when his beloved grandma died, he asked for her Le Creuset pot. That’s all he wanted. Everything he needed to hang onto from her was bound up in that cooking pot. Ask him yourself on Twitter, @NathanSheffield.

Or ask me. Will and Grimsley have requested that I answer cooking questions on Twitter, where I'm @ruhlman (which if you already follow me, you know I love to do). I'll be watching for questions with the #LeCreuset hashtag.