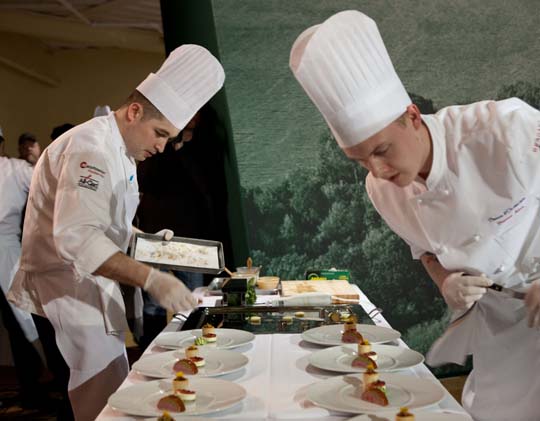 James Kent, left, and Tom Allan will represent the US in Lyon this week.

What do culinary competitions mean in America? Reality shows on Bravo and the Food Network pitting chefs against one another have made compelling TV and earned huge audiences here, but actual not-made-for-TV competitions remain off the radar. American chefs who competed in them were relative unknowns, and the most well-known chefs, those with high profile restaurants, tended to dismiss them for their old fashioned, aspic-coated food platters and the hotel and country club chefs who created them.

But in 2008, one of the most revered chefs in the world, Paul Bocuse, famed both for his food and his restaurant as well as his unusual media savvy, aimed to change that by attempting to elevate the competition he created in 1987 in the eyes of America. To do this, he asked two of America's most famous and revered chefs, Daniel Boulud and Thomas Keller to lead an effort to do just this, bring high profile chefs into the competition arena. To do this, they created a non-profit foundation, Bocuse d'Or USA, that could raise money to fund the training, food, and travel required for the competition.

In 2009, Timothy Hollingsworth, long time French Laundry chef, now its chef de cuisine, trained and competed in the competition, the first time really that the American team had actual financial and personnel support, training facitities, and a coach, Keller mentor and competition veteran, Roland Henin. (The entire process and the competition itself is well documented in Andrew Friedman's Knives at Dawn: America's Quest for Culinary Glory at the Legendary Bocuse d'Or Competition.)

This year, James Kent and Tom Allan (photo above courtesy of Bocuse d'Or USA), sous chefs at the excellent New York restaurant 11 Madison beat 11 other teams at the Culinary Institute of America to represent America.

One of Team USA's primary sponsors is All-Clad. In an effort to make more people aware of the competition, All-Clad is sending me and eater.com's Joshua David Stein to Lyon to cover the events for social media. I'll be posting frequently on All-Clad's fb page, as well as writing about it here, and on Twitter. All-Clad has made it clear that they don't care what we write only that we write. What they want is more awareness for the competition itself. And I'm all for that.

As for the validity of the competition itself?  Read these thought and frank remarks form Grant Achatz, in The Atlantic, who helped judge the 12 teams at the CIA, on competition and creativity versus technical execution.

And a selection of eater.com's coverage.