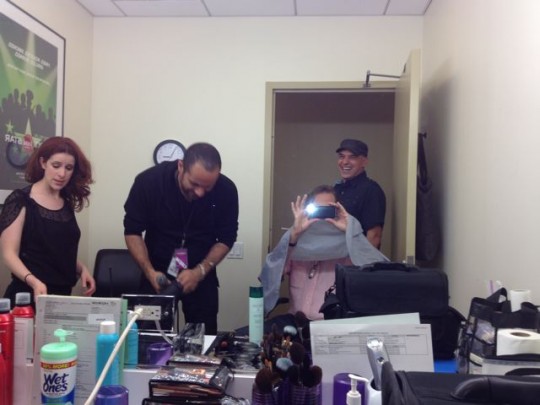 Getting ready for Iron Chef America, with Michael Symon in the doorway. Self-portrait.

God, do I feel lucky. I'm flown in to NYC to judge Iron Chef America at the Food Network, which allows me to do all kinds of other amazing things, since they don't care when I come or go and I have dear pals with whom I can stay. I've joined CAA, which wants me to help me do more fun stuff, and I met with really interesting smart TV producers—one of whom, amazingly, also took a writing class with my mentor, RP. 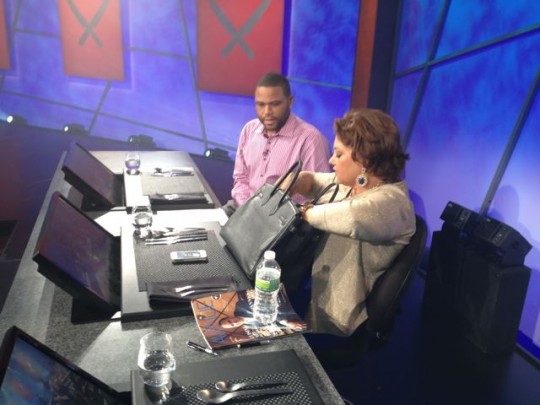 First night there, solo, and dying to see a good show, I asked my hostess, Amazing Annie, what to see. "Go see Cock—it's great and an easy ticket." It is and it was. But more amazing was the venue. On 42nd between 7th and 8th, amidst all the glitter and kitsch, The Duke Theater is a mini coliseum-like staging of wood seating, with maybe 120 seats surrounding a small disc of a stage 18 feet in diameter. For 90 minutes four people—in street clothes and with not a single prop—played out an amazing drama that took place in a kitchen, a back patio for dinner, a British flat (all Brit accents and all American actors, Annie said), and in a bedroom, the best sex scene I've ever seen in theater, all suggested, fully clothed but incredibly beautiful and erotic.

This is what NYC is about for me. Theater you really can't see anywhere else. So much so that when Annie said she had tickets to Once, I was kind of bummed. She said she heard it was great and she sees everything. Donna had joined me by this point, and she didn't say so but she was lukewarm on the movie and didn't like the title song, but we went along for the ride.

IT. WAS. AMAZING. Even the New-Yorker-seen-everything was fanning her face and rolling her eyes at intermission saying, OH MY GOD. Yes, that good. She said something along the lines of, "We are seeing one of the best things ever to be on Broadway." Unbelievable energy; the music, sound quality, script, score, and complicated one-set maneuvering were all incredible. It took an hour and two Negronis at Bar Central before I felt myself again. And when I did, one of the cast members had sat down, Ann Nathan (the gruff Czech mother). When she found out what I did she professed undying love for Michael Symon. I said, "Donna and I went back to their new SoHo digs to hang out last night." Ann said "We have to do a food-cooking-music show!"

Where did I eat? After I saw Cock, I met Annie at Jean-Georges, in the casual area. And I am always impressed by how a restaurant as old as JG stays so on its game, with perfect service and food. I didn't get there till 10 but JG himself was still zipping around making sure all was well. Earlier in the day I'd stopped by Le Bernardin to say hi to Eric, who still looks 35 even with gray hair, and marveled at how amazing Le Bernardin was all these years later. It is one of the world's best restaurants. Period. I'm biased, yes, but I wouldn't say so if I didn't believe it.

The next day, because I had to be at Food Network to do Iron Chef, I took Donna to Spice Market, another of JG's places and, again, service was perfect, as was the food, and I was flattered that one of the hostesses had left her CIA practical several years ago to get her copy of Making of a Chef signed when I was there. That made me feel so good.

I met my friend Laura, an old Duke friend who wants to sell a novella I accidentally wrote, for lunch at CraftBar—again, splendid service and splendid food. And because they'd recognized me, they sent out a small taste of prosciutto, lardo, and coppa, and Laura said, "I love going out to lunch with you." I said, yeah, I'm really lucky.

It's true, it happens. I'm shy about it but not rude, and always grateful, though I prefer not to be noticed. Except for sometimes.

I was meeting Donna at Gramercy Park and was 45 minutes early, so I stopped in at the bar of Gramercy Tavern for a beer (they had Jolly Pumpkin, an amazing brewery). The chef, Michael Anthony, came out introduced himself. They brought out a fire-roasted oyster while we talked. These things happen, and I'm humbled. Chefs tell my how much they admire my work and how much they loved Charcuterie and I want to tell them that I admire what they do about a hundred times more than what I do because they are really doing something special and hard. 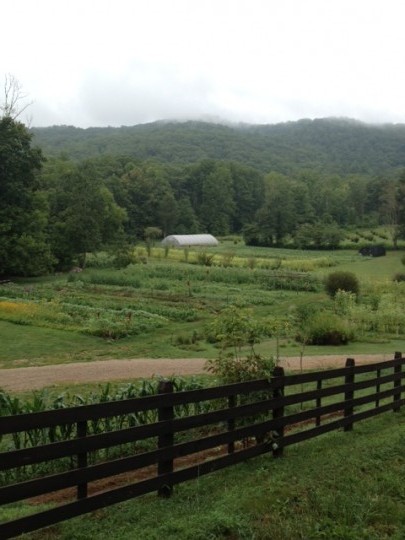 Chef asked me if I'd ever killed a big animal before because he'd just this weekend visited Blackberry Farm, where they'd toured the garden, killed a lamb, dressed it, and cooked it. It had been such a deeply moving experience he had to tell me about it. He showed me pictures. How important it was, he said, to understand the whole cycle of life. 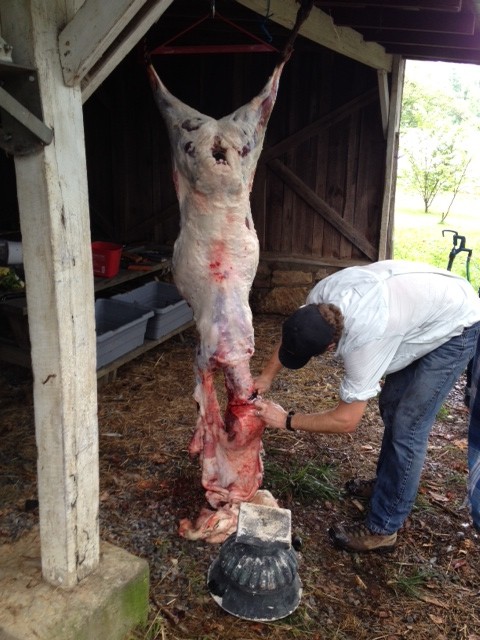 I told him he was being a chef in the best possible way a chef can be. 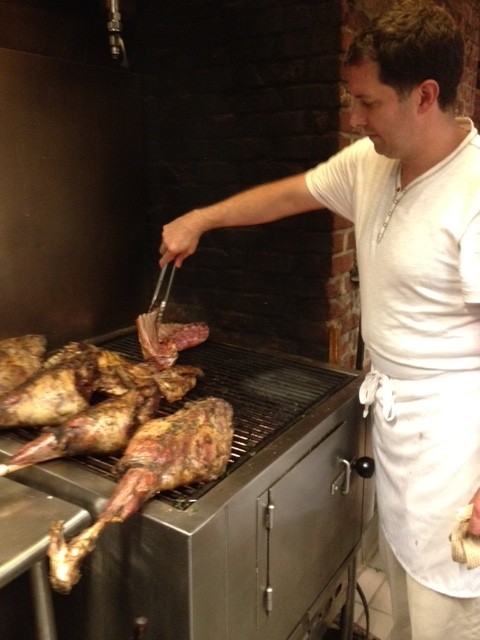 His wife grew up eating clams in the summer, so he wanted to put roasted clams on the menu and he served me the best roasted clam I've ever had (recipe and photo below). But the secret to the one I ate, he said, was that they'd put some bay scallop into it for flavor and sweetness. Sooo good.

And I walked out into the low golden light of that warm evening to meet my wife at Gramercy Park, feeling incredibly lucky. How did I get here, where I never sought to be?

Luck follows me, or maybe luck pushes me against my will.

Listen to this. This is the whole point of the two-part ramble.

My second night there I'd planned only to work and stay in, no restaurant, no dinner. But I got a call from a friend's son, just graduated Fordham, wanted to talk, ask advice, anything. I told him where I was, he said he could be there, met me at a bistro around the corner from where I was staying. We had an amiable chat, me the elder, he just starting out and looking for television work. I had two Martinis and a fabulous conversation with him—he was bright and eager and so, so young. My old self.

I walked him to the subway at 81st and CPW and alone, hungry for Chinese food (which we don't really have in Cleveland), I thought, Shun Lee West is within walking distance, 65th Street. I used to go there with Cindy and her folks, when I was young. How I loved the chicken with cashews there. I had nothing else to do and I was done with work and hungry. So I walked.

It was a Tuesday night, and while Shun Lee was hot in the early '80s, it was no longer hard to get a table. Their food remains great, and so is the service, and I just wanted the memory of cashew chicken that I'd loved when I first arrived in New York as a young man, to remember it and then go back to Annie's. Of the 150 or so seats only three or four tables were occupied, otherwise it was a black and white desert. Silent. I could hear whole conversations. I ordered the cashew chicken and a beer, and it tasted just as I remembered it. And while I was eating, alone in a sea of tables I heard a voice I knew. In a distant corner table there he was. The voice is unforgettable—watch the Charlie Rose interview—there he was. It was Arthur Gelb. I hadn't seen the man in decades, the man who let me in to the party, the man who said, "You got energy, kid. I can see it in the way you sit on the edge of the chair, ready to go." My 48-year-old self didn't know what to do. I asked the maître d' for assurance. Yes, that's Mr. Arthur Gelb, he said

When Gelb stood for his cane, the party of six leaving, I bolted the table, not wanting the chance to get away.

"Mr. Gelb. Excuse me for interrupting. But I have to reintroduce myself. I have to thank you."

It took him a few minutes. But then he remembered and said, "I'm not so old after all!" He must be approaching 90. I may have felt lucky in the moments I've described above. But never on this whole New York trip did I feel so lucky for this coincidence.

What I wished I could have said, but of course couldn't, was: "Do you know how many lives you have moved?" Not even stars discovered and elevated. Just people. Young writers. Mr. Gelb walked out slowly with his group, and I walked home alone, feeling indescribably lucky. Which of course I was. 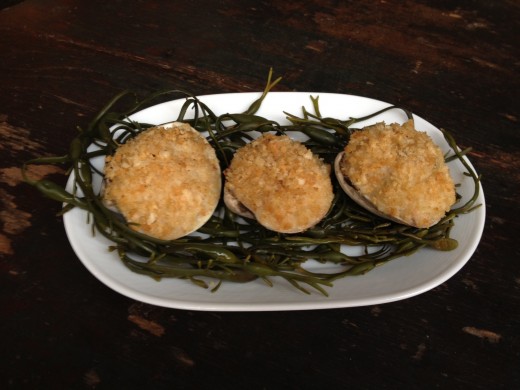 If you liked this post on New York Story, Part Two, check out these other links: