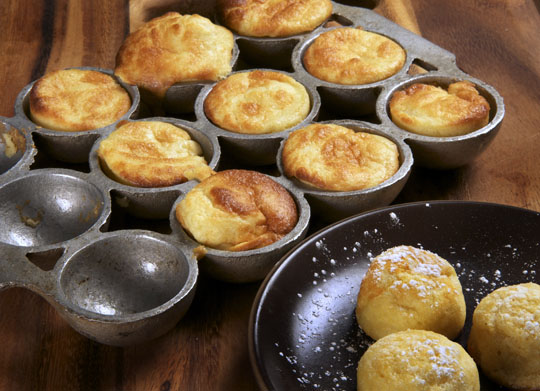 I love Twitter for maybe 50 or 60 different reasons and this post resulted from one of them. A year ago, Donna was poking around in an antique store, bought the above pan for no explainable reason and put it in the basement where it sat untouched for, well, a year. The other day, looking for something to shoot an egg in, she brought it upstairs along with a few other props. The cups are about twenty-five percent bigger than the fattest part of a large egg and it didn't work as a prop. I'm sure I said something annoying like, "You bought that," as in paid cash money for something we can keep in the basement for a year? Then I said, "I mean, what is it." She said something along the lines of "I don't know" and carried on with whatever she was shooting.

I took an iphoto of the pan and asked Twitter, which has yet to not offer up at least one correct answer: "an æbleskiver pan," many tweeted, to make Danish pancakes. Most people said they had stovetop æbleskiver pans. I'll say that again.  MOST people, have STOVETOP æbleskiver pans. Which left me wondering how MOST people had even heard the WORD æbleskiver, let alone knew what they WERE, let alone had PANS to cook them with.

I gotta get out more.

I immediately emailed my Aunt Nancy, mom's sister in Charlotte, NC, who married a Dane. She showed Lars the picture and he said, he'd never seen an æbleskiver pan like that before. But she confirmed, that's what it looked like to them, too.  A search on amazon: yep, of course, we sell an æbleskiver pan, who DOESN'T sell an æbleskiver pan? Want a bunch of æbleskiver recipes, here's the book! You don't have it?!

Nancy sent me her recipe for what I now know to be lovely little cakes. I'm partial to an oven æbleskiver pan, not those sketchy stovetop models. Oven deals you don't require you to turn the cakes. For the stovetop version, you've got to turn them, and I don't have any knitting needles, which is what Danish people use to turn them with.

These frankly are some of the best little cakes I've had. In Denmark, it's tradition to have æbleskivers before Christmas with gløgg. What a lovely idea. They're also a great cake for a Sunday morning treat with coffee and The New York Times.

What distinguishes these pan cakes is that they're made like a proper cake: whipped egg whites are folded into the yolk-milk-buttermilk mix. They're sweetened, just a little, not too much. You can bake this batter on your stovetop æbleskiver pan, or in the oven version your wife bought last year to keep in the basement. Or you could put them in muffin molds. They won't have the traditional cute dome shape, but that won't matter if you aren't having Danish friends over and try to claim that they're æbleskivers; of course, because the word is just fun to say, DO tell your Danish friends that these are the American version and everyone can have a good chuckle—æbleskivers!

It should be an all-purpose exclamation.  Like when you're halfway to the grocery store and realize you forgot the shopping list: æbleskivers!

Anyway, they're delicious. Thanks for the recipe, Nancy (her comment: "There are lots of different recipes for these but this one always works for me"). Hers made 3 dozen and we were just a few, so while I kept the egg amount the same, I halved everything else. Cakes love egg, so I figured it would work. And it did. (I mixed the batter in one 1-quart measuring cup, and whipped the whites in another one—worked great, for light fluffy cakes).

If you liked this post on Aebelskivers, check out these other links: