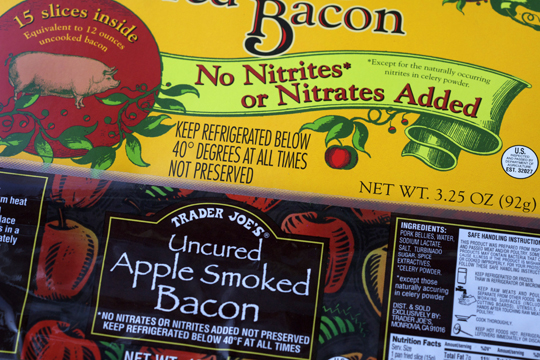 During a recent phone call with the excellent Elise of simplyrecipes, Elise wished aloud that I would address the nitrite issue directly.  “Trader Joe’s carries it!  Go look.  Is there one near you?”

Indeed there is, and indeed they sell at least two products pitching themselves as a “healthier” bacon because they don’t add sodium nitrite. This is as odious as those sugar laden granola bars trumpeting “No Fat!” on their label—food marketers preying on a confused consumer who has been taught to fear food because of harmful additives (such as the recent, apparently genuine, Red Dye 40 warnings).

Full disclosure if you don’t already know: I am a vocal bacon advocate, and one of my books, Charcuterie, relies on sodium nitrite and sodium nitrate for many of its recipes to cure foods such as bacon, ham and salami, so take all this with, um … no, I’m too pissed off to pun.

Please, if someone can tell me what is wrong with nitrates (in green vegetables) and nitrites (in curing salts and in our bodies, a powerful antimicrobial agent in our saliva, for instance), I invite them to do so here.  In the 70’s there were studies finding that at high temps, they could form nitrosamines, cancer causing compounds.  I don’t disagree, but burnt things containing nitrite are bitter and unpleasant so we’re not likely to crave them in harmful quatities.

Aspirin is not bad for you, right? Helps with a morning head and achy joints. It’s even taken for its heart benefits. But eat enough of it and it's toxic.

The fact is, most nitrate we consume comes from vegetables. Nitrate we consume coverts to nitrite in our body, which is a anti-microbial agent in our guts. Sodium nitrite in bacon cures the bacon (more info in my safety concerns for charcutepaloozians) and then converts to nitric oxide, so, while I’m not chemist, I have heard others suggest that you’re not actually consuming any nitrite by the time the bacon gets to you.  Again, almost all the nitrate and nitrite in your body comes from veggies.  It's an anti-oxidant.  Studies are coming out now saying it's good for the heart.

A study in the Journal of Food Protection put it this way: “Since 93% of ingested nitrite comes from normal metabolic sources, if nitrite caused cancers or was a reproductive toxicant, it would imply that humans have a major design flaw.”

Bacon is one of the greatest foods on the planet, but the food marketers are going to figure out a way to make you buy their bacon.  So what they do is use celery powder and celery juice (note the asterisk on the label above) as their nitrate source (celery is loaded with nitrate) and are therefore are allowed to say no nitrites added.  Why go to the trouble? Because we don’t know any better.  Can we really be this stupid?  I have only one word to say on this beyond an emphatic yes.

More than a few scientists and physicians read this blog. I'm neither, so I invite anyone qualified to give me evidence that the sodium nitrite added to food in appropriate quantities (which we’ve been doing for millennia) is truly harmful.  Please, I want to know.  Until then, I’ll hang with the AMA on their nitrites stance: “given the current FDA and USDA regulations on the use of nitrites, the risk of developing cancer as a result of consumption of nitrites-containing food is negligible.”

Don’t be stupid. Don't let food marketers trick you.  Eat natural, minimally processed foods.  Eat a balanced diet.  Cook it for yourself and the people you care about. Enjoy a little fat. Salt your own fresh food yourself.

But whatever you do, stay away from too much celery.  That stuff’ll kill ya.

Callout Comment: Elise Bauer responds: "The thing that irks me is the "no added nitrites or nitrates" as if the fact that they're adding celery powder means nothing.  Or "uncured" even though they are obviously "curing" with celery powder.  It is false, misleading, and playing off of people's food fears to market their cured product that is loaded with nitrates.  When I saw a bright pink slab of corned beef for sale at TJ's, marketed as "uncured" I knew there was a problem."

If you liked this post on nitrites, check out these other links: