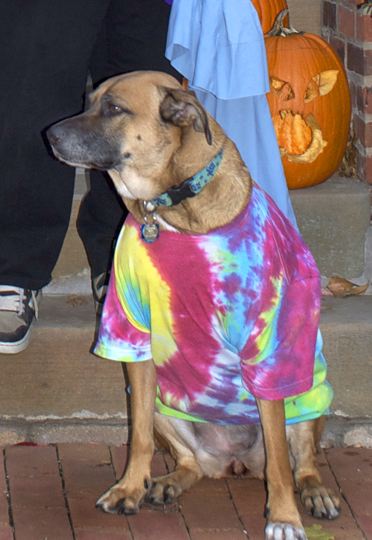 ©photo by Donna Turner Ruhlman—click photo for her blog

Daylight Saving Time remained in effect on Halloween, so a sky of scattered clouds was unusually bright.  We’d spent the afternoon at Thomas and Heather’s across the street, eating pizza straight from the wood oven in their backyard, surrounded by our neighbors and their kids.  All the women were cold and stayed close to the fire. Dogs fed at dropped crusts. Football on the front lawn, basketball at the back of the drive.

When it was time for costumes the parents with little ones went off to get ready.  At six, I poured a beer into a red cup, pulled a cigar from the downstairs freezer, one of two I’ll smoke all year. I put the dog on the leash and set out behind four 11- and 12-year-olds.  I used to have to go, to look after the children.  During the last two Halloweens my oldest friend walked with me.  Before that, I’d be with my neighbor Dan and always my Dad would appear beside us in one of his masks.  This year the boys didn’t need me, though I helped keep them efficiently away from the dark houses (they always held out hope), and they unanimously hated the cigar.  But really, they were on their own—“Dude, I can’t believe you went for the Almond Joy instead of the Skittles”—so it was really just me and the dog (tie dyed T-shirt this year, the cape last year never stayed on).  And an extraordinary sky.  Deep deep blue, cold air, steel-gray clouds that were half electric pink from the falling sun.  I could see the steeple of St. Mary’s hit full on with yellow.  The last pink sugar maple leaves hanging on. Oranges and browns taking over. The air smelling of piles of leaves raked to the curb.  On Halloween it has always been dark.  I’d never seen such bright clouds.

Halloween was my dad’s favorite holiday.  When we were very young, he and his pal Bill up the street followed us and smoked a cigar and drank beer (which is why I did).  When he'd follow his grandkids, he'd wear one of any number of scary masks.  This afternoon, I had been surrounded by the people who, with family and a few deep friends, matter most to me, my neighbors, the people who surround my family with their families.  I followed my son and his friends door to door, adults stooping to offer candy. James, bless him, was an eggplant.  Don’t know why. He’s no fan of eating them.  There were capes and masks, sombreros and bloody swords as well.  And when they’d come back round to our house, they stopped only for candy, then peeled off for more streets and I watched them go, to be with Donna, just home from New York and handing out candy, squatting to praise a four-year-old skunk and her skunk mom, to admire the wings of a butterfly.  My daughter, once a bunny, once a princess, is now 15, and has been gone all weekend, off with best friends.  James will be doing that, too, soon—or rather, too soon.

My last Halloween walk, alone in this unusual light, missing my dad.