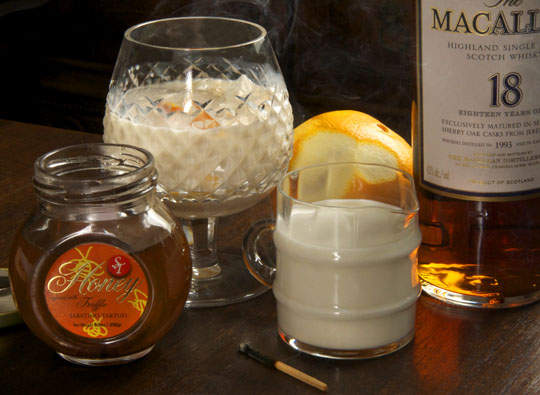 "Major Award," from Stefan Was, of Cleveland, OH

This was chosen from many, many wonderful names, by Paulius and Claudia, and I whole-heartedly embrace this great and elegant name, in its saying Cleveland without using Cleveland, its nuanced suggestion of Christmas and fun without saying either. Poetry! "Major Award" is a reference, of course, to one of my favorite movies, "A Christmas Story," which opens in Cleveland's Public Square. Donna and I never see a box with "Fragile" written on it without saying aloud, "Fra-GEE-lay." Darren McGavin's major award was of course, the famous leg lamp. Stop by Paulius's Velvet Tango Room, and you'll see the lamp in an upstairs window. Stefan, Paulius says come on in and you'll have a Major Award on the house. I'll get a copy of Twenty out to you shortly! (Here's a link to the drink itself, a decadent but simple combo of Scotch, truffled honey, and half-and-half.)

"My favorite technique has got to be acid, because it was such a revelation when I discovered its power. Before then, it was more salt, more butter, more something else to really bring a dish to life. And then when I found out just a little bit of lemon or vinegar could really make something sparkle, I was hooked."

"Hard to pick just one, but I think I’d say that dough is my favorite technique. I find working with yeast dough very therapeutic and I love the smell of bread baking and the satisfaction of cutting into a still steaming loaf of bread."

"Well, I don’t cook much because a) I usually mess it up and b) my hubby is a CIA grad and usually cooks for us instead (the kids are thankful) … but my favorite technique that HE does, is grilling. I’ll take the grill over all else any day! Nothing like that charred taste … and always over charcoal. Happy Holidays!"

"Think! Think a recipe through before you start and after you’ve made it. I’ve learned as much from my mistakes as I have from instruction."

And finally the big ticket winner, winner of the SousVide Supreme and Ruhlman's Twenty, is Rob White, of Belmont, NC. (All winners except for Stefan were chosen using a randomizer, btw.)

Congrats to all and happy holidays, happy cooking!