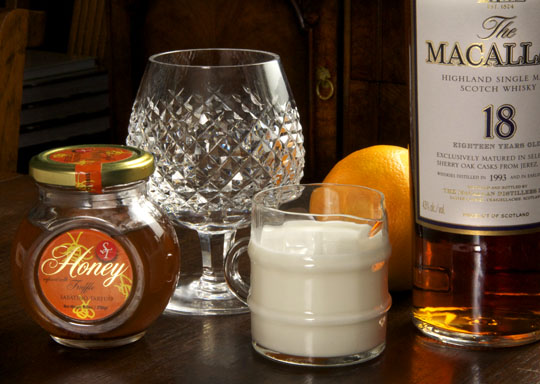 Mise en place for the cocktail to be named.... Photo by Donna Turner Ruhlman.

A few weeks ago when Donna was gadding about in NYC, I asked my dear pal Lester if he'd have a drink with me at the best bar in the world, aka Velvet Tango Room. I wanted to have a look at its menu and to have a cocktail I created, or rather, riffed on a classic, The Martinez. Mine is called The Berkshire Martinez and I am honored to be on the menu. The bar's owner is Paulius Nasvytis. In a tale too odd and complicated to go into here, he and Claudia Young, longtime Nashville resident, are an item. Before Lester and I could head off for some greezy Chinese chuck, Paulius and Claudia arrived. They had created a new cocktail and were eager for us to try it. It is a fabulous cocktail—single malt, truffle honey, half-and-half—and a perfect holiday libation, rich and comforting. I was too cheap to fork over $80 for a bottle of the recommended Oban for the photo. The Macallan is perhaps the best-balanced single malt whiskey, so I used that. But I have to agree with Claudia that Oban is perfect. Lester took a sip after I took a sip and wouldn't give it back, shaking his head over how good it was. Ever had milk punch? This is like the best milk punch ever created.

But it doesn't have a name! And that means ... Contest! Whoever comes up with the best name for this drink wins a signed copy of the new book Salumi (or Charcuterie if you prefer) and a signed copy of Ruhlman's Twenty: 20 Techniques, 100 Recipes, a Cook's Manifesto. Special attention will be given to names that include "Cleveland," but this is not critical. We're looking for the best name. Feel free to enter as many names as you want.

Here's Claudia on the creation of this wonderful holiday treat:

"Paulius wanted to do something with truffles because last winter we went to Grant Achatz's Aviary and had a black truffle Negroni, which was, as one might expect, quite heady and, well, fantastic. So we decided to experiment using truffle honey—and after a few trials and errors I got to thinking that anytime I'd ever eaten truffles it was with something rich—fat and truffles go so well together. So I thought to use half and half. The question then was what spirit—and we both said scotch at the same time. P brought home a few bottles from the bar, and for me Oban was the clear choice. Next up was how to garnish and P said orange and I agreed but with a flame—and voilà! A cocktail was born!

"As for the scotch. I understand it's not an inexpensive cocktail and that many would consider it sacrilege to adulterate a fine single malt. But I suppose my thoughts are that those who dare will reap the reward. The Oban is somewhat floral and not too peaty. I found The Macallan too big and Laphroaig overwhelming, while the Oban, definitely more finessed, blends beautifully with the truffled honey, cream, and orange. Buy a bottle. Make a few of these, discuss its virtues—and then sip on the rest. To me it is the quintessential holiday cocktail, albeit somewhat decadent. But so is popping a cork on a bottle of good champagne."