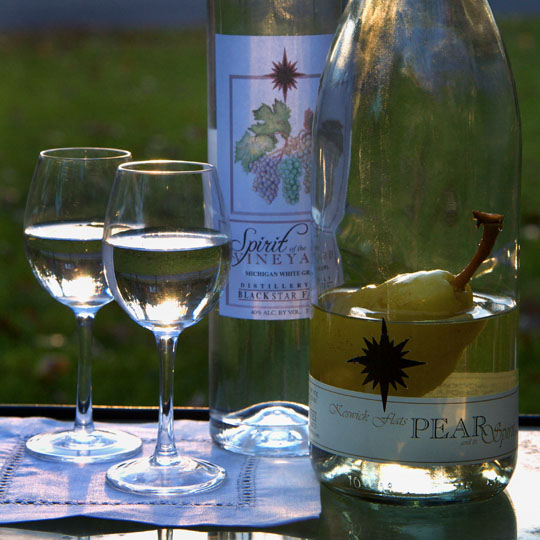 I’ve recently returned from inspiring days at Pigstock, in Traverse City, Michigan, where I and my partner in Salumi, Brian Polcyn, were invited to participate in a celebration of the pig. But we also got to sample wines and spirits made from the abundant fruit that grows in this unique climate.

I have, since I first imbibed the crystal elixir, bowed before eau de vie, the aptly named water of life. My first vision of it was in the 1970s when my Uncle Lars arrived at our house with a gift of Poire Williams for my father; astonishingly, there was a pear inside the bottle. I did not get to drink from this as I was 10, and my dad felt that if they could get a pear inside a bottle, it deserved to remain sealed and marveled at for at least a year, and then doled out carefully. I was 16 before I got a sip of the magical fluid. (Now, at 49, I am less careful with the portions; Brian and I made considerable headway into the brandy in Traverse City, with only a little help from dear Kate of Camont, who'd made a special stop on her way to Grrls Meat Camp in Chicago. Kate's first comment: "It's so smooth." Indeed, with a heady pear aroma.)

Ten years later, Donna and I, boyfriend and girlfriend, “acquainted” for only eight months but in love forever, traveled to Italy to do our first story together on the marble of Carrara. Here I first tasted lardo (1988, when raw pig fat was considered instant death in America; I write about this in the new book), but also grappa, the spirit made from grape skins—byproducts from the wine-making—further fermented into an inferior wine, but then distilled into a wonderful clear spirit. Raw pig fat! Grappa! What a world, I thought.

Unable to buy the stuff in Ohio for years given our Civil War–era liquor laws and unhappy with the industrial lighter fluids available in Florida where my mom lived, I was at last in heaven again this summer on my 49th birthday (having taken Donna to Italy to celebrate her 5-0 the day before). We splurged on Splendido (go for the rooms by the harbor, Splendido de Mare, not the posh hillside main resort). I bobbed up and down like a cork in the brine-strength swimming pool; we had a lovely lunch and, after, the best grappa they had.

And then, this past Monday afternoon, having cleaned off after the hog slaughter in upstate Michigan, where I'd eaten raw pig fat, warm back fat from the freshly slaughtered Mangalitsa, we visited a local winery, Black Star Farms where owner Don Coe pointed to his still and said, “That’s what does it. We should have a taste.”

"It" was grappa. "It" was pear and oak-aged apple brandy. And "it" was heaven, made from the fruit of the state my mother was born in, where my grandma was to be buried two days hence. Hemingway camped and fished just to the southwest on Walloon Lake, the setting of some of his first stories. Fruit grown in the sandy sloping soil on the peninsula of Traverse City is superlative. Apples and pears and grapes raised in a climate made temperate by the largest bodies of fresh water on the planet. Michigan fruit is transformed into not only apple and pear brandy and grappa but also, what they’re known for, white wines in the Riesling style as well as incredibly big reds, such as the Cab Franc Merlot served at the Pigstock fund-raiser dinner. The region is also home to extraordinary local beer. Beer and wine and spirits to be taken seriously, worldwide, as far as I'm concerned.

I didn’t need to love Europe because it made great food, food close to my soul, I just needed to live long enough for America to figure out that we could make it ourselves out of our own ... [intone heavy French accent] ... terroir. The wine sucked at first, what we made here. You can’t just make great things right off the bat. Quality takes time, trial and error, thinking, but we’re doing it, and I know of no better model than Traverse City, which serves as a great example of what’s possible, producing extraordinary products from what grows best in the region. Can we make great wines in Ohio? Remains to be seen. Can we make great beer? You bet. Can we make great cassoulet? Oh yeah.

(But you know what, I can't get Michigan grappa in Cleveland because of our stupid State Liquor Board Control, which must list it before it's allowed to be shipped in; they let one shitty grappa in, that's it. Can we ship all government officials, House of Reps first aboard, to Australia and have a Thomas Jefferson do-over?)

Today’s Friday post is a digestif, rather than a cocktail, which is customarily taken after a meal, enhanced with tobacco if you partake.

Regardless, appreciate and encourage the bounty of this astonishing country. Preferably while you're enjoying a a good martini or a post-meal eau de vie.