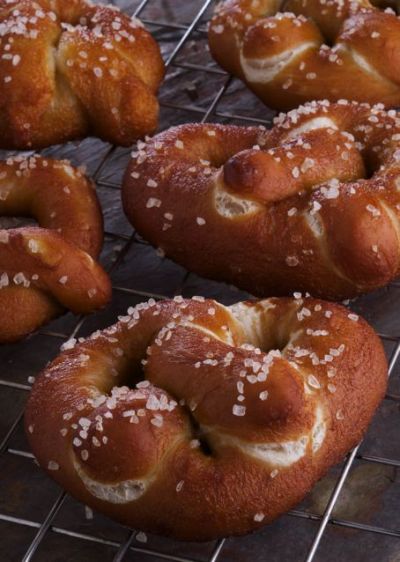 How to Make Pretzels

My obsession with pretzels began with olives and lye, but I was only moved to actually figure pretzels out after a comically disastrous demo at the Fabulous Food Show on Saturday.(Before the demo, hanging out with Symon and Jonathon Sawyer, I mentioned my demo and said, "It's a no-brainer, it's so simple nothing can go wrong." Symon clutched his bald head and shouted, "DON'T SAY THAT!!!")

Half my demo was on baking and making a 5:3 bread dough into several products, and I also wanted to bake gougères, cheese puffs, so I went early to make sure the ovens were cranked. I was assured by the very efficient woman running that stage that it was. Thirty seconds into the demo, I went to put a loaf that had risen into the oven, and realized it was stone cold. It went downhill from there. Bread that didn't bake, fritters that didn't cook through, pâte à choux flying all over the place. A real mess. Even the pretzels, baked backstage, came out albino.

For my atonement, and to prove to myself that I hadn't entered an alternate universe, I remade pretzels. The whole point of my demo was to show that fundamental preparations such as dough and batter have infinite variations. A basic batter can be turned into pancakes or spicy corn fritters. A basic bread dough can be a country-style boule, a pizza dough, or even pretzels. Certainly you can bring all manner of additions, tweaks, flavorings, and nuances to your cooking, but the fundamental preparations have a basic structure, described by a culinary ratio, and if you know that ratio you're free to improvise. (Here's the book, essential reading for all cooks!)

For example, to those who have embraced ratios, I can simply say, to make pretzels, mix a 5:3 bread dough, shape pretzels, brush with a lye solution, add salt, bake, and you're good to go.

It's that lye solution you have to know about. I found that 1 teaspoon per cup of water worked fine. It's a powerful base and can burn just as well as an acid so be careful when working with it. I've made pretzels by brushing the lye on, but yesterday I gave them a 15-second soak in a hot but not boiling solution, then salted and baked them. The heat and water gel the surface that then becomes a beautiful brown with that distinctive pretzel flavor. According to McGee, the lye "reacts with carbon dioxide in the oven to form a harmless, edible carbonate." McGee also notes that commercial pretzels are sprayed with a 1% lye solution, baked, then dried till crunchy, and that you can also simply use baking soda to achieve the same result you get from lye. How much baking soda, I don't know—anyone who wants to experiment with baking soda using the method below, I'd love to know your results. (Calling del Grosso!)

The following recipe will make about 10 pretzels.

There's no end to the fun when you know the basic bread dough ratio!

Update 10/9/2012: The Bouchon Bakery Cookbook comes out two weeks from today; there is, happily, a recipe for pretzels from head baker Matt McDonald, one of the greatest bakers I've had the opportunity to work with. He uses a levain (a pre-ferment for flavor) and a very slack dough. Matt told me that the manufacturer recommends a 4% lye solution; he uses a 4.2% solution. He uses room-temperature water (just be sure the lye is dissolved), and gives the pretzles 20 seconds in the bath.