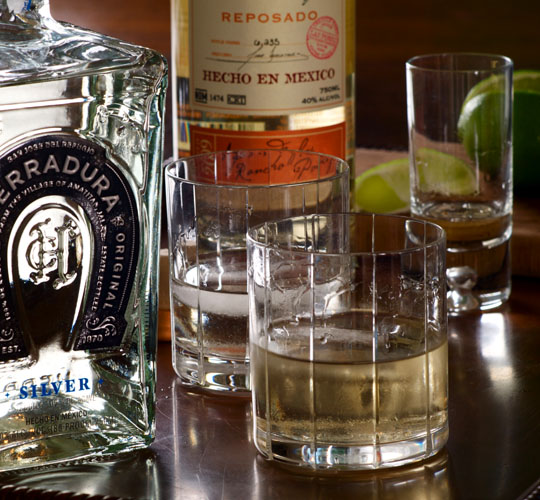 Sipping tequilas on the rocks, so delicious. Photo by Donna Turner Ruhlman

I'm a coffee cretin (percolator, Starbucks—incorrigible), but I'm a tequila novice newly entranced by this fine spirit. I was introduced to tequila, and its wilder cousin mezcal, in college when we knew only Cuervo. It was a rule between my freshman roommate, John, and me that a top never went back onto the bottle of tequila once opened. And because I unfailingly woke up in the dorm-room bed of some impossible sexy young woman after a bottle of tequila, I believed in the veracity of this rule.

But we grow old, tastes develop, and hangovers now last considerably longer than the two or three hours they did in college. In the midwest, the adults were gin and whiskey drinkers, though my dad kept a bottle of Patrón on hand for anyone who might ask. So it never occurred to me to order tequila as a drink until two prominent, smart friends, did so routinely: Eric Ripert, chef and co-owner of one of the best restaurants on the planet, Le Bernardin, and the writer-director Richard LaGravenese, currently finishing up filming a new movie in NOLA (#jealous!), both simply asking for Patrón Silver. I didn't even know what the "silver" referred to.

I do now, thanks to a little jumpstart from Twitter.

Good tequila can and should be savored for the nuances it offers. While no spirit surpasses Scotland's whiskies for complexity and variation, tequilas are every bit as complex and varied as American whiskies and should be appreciated as such.

I chose the above Herradura Silver because that was the most commonly cited brand offered when I asked on Twitter. The silver refers to straight tequila, not aged in a barrel; thus its clarity and bold, fruity flavor of agave, the succulent plant from which tequila is made. I also feature here Tequila Ocho Reposado, which is naturally fermented and aged for eight weeks in a barrel (they also offer a plata or silver, and an anejo, or tequila barrel-aged for a year). The reposado is drier and finer than the silver (or plata). The Herradura is excellent, the Ocho superlative. The latter was recommended by Bobby Heugel on Twitter, who also called my attention to the Tequila Interchange Project, a tequila advocacy site, and to the ecological dangers (from waste water runoff) of mass tequila production and the need to be patrons of producers who work to be ecologically conscientious. Read about the unique history (terroir and vintages) of the Tequila Ocho on its site. The primary tequila classifications are described at tequila.net.

No need for advocacy here! I'm all in. But there is a need these days to hang on to the top of the bottle, as these should be savored in small doses. The old result, happily remains. Every time I drink tequila, I wake up the next morning in the bed of an impossibly sexy woman (she took the above photograph—thanks, darlin').

If you liked this post on sipping tequila, check out these other links: