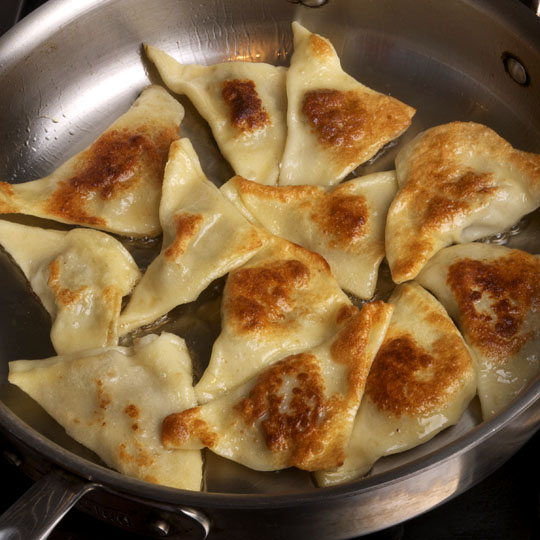 My neighbor, Lois Baron, gave me a version of this recipe, which calls for roasting and braising a beef brisket. When I told her I intended to give it a shot using leftover pot roast she said, excellent idea! Kreplach, a great way to make use of leftovers. Kreplack are often called Jewish ravioli, a staple of Jewish cuisine. Consistent with that cuisine, the main item is cooked, then it's cooked again, and then its cooked again. (Why is this?!) At least in Lois's recipe. A brisket is roasted, then it's braised, then it's ground with seasonings and egg, wrapped in dough, boiled, cooled then cooked to serve. That's three times that it gets fully cooked before being eaten. These are traditionally used in soup, and they're great that way, but Lois fried some for me and they were out of this world. There's something about the texture that's really really satisfying when they're fried crispy. And given the opportunity to fry, I say fry! I served these ones last night on shredded sautéed cabbage to which I'd added chicken stock, whole grain mustard and a few drops of red wine vinegar. 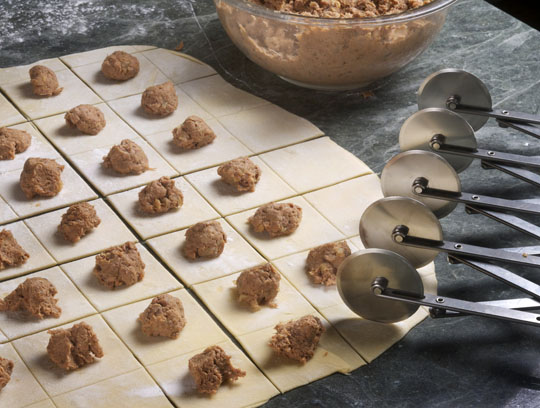 Lois's dough is perfect—supple and soft enough to roll thin, but dry enough that I had no problem rolling it out without its sticking. I happen to have boffo bicycle cutter thanks to Opensky for perfect uniformity, but a pastry wheel, pizza cutter, or pairing knife works fine, too; these measured a little under 3 inches square.

I used egg wash to make sure they had a good seal. I folded them into simple triangles and boiled them. Lois says her mom always had a batch of these in the freezer. Indeed, make a double batch; they're great to have on hand for a last minute meal.

This makes about 40 kreplach.
Checking my two best tomes on Jewish cooking, I see that Lois's dough is identical to one of them, though she didn't know about the book. If you want to know more about Jewish cooking, I highly recommend Arthur Schwartz's excellent and beautifully published Jewish Home Cooking.  (But why "home" cooking; isn't Jewish cuisine defined by home cooking? Is there a lot of Jewish restaurant cooking? How about a Jewish tailgating party book? Actually the reason for it isn't a good one, so I shouldn't make light; so much of Jewish cuisine was defined by poverty and life in ghettos. But the fact is, Jewish cooking is the quintessential home cooking, which is why I love it.)
The other great book I use is by this country's doyenne of Jewish cuisine, Joan Nathan: Jewish Cooking In America. Both books are rich with story and recipes.
If you liked this post on the great Jewish dumpling, kreplach, check out these other links: