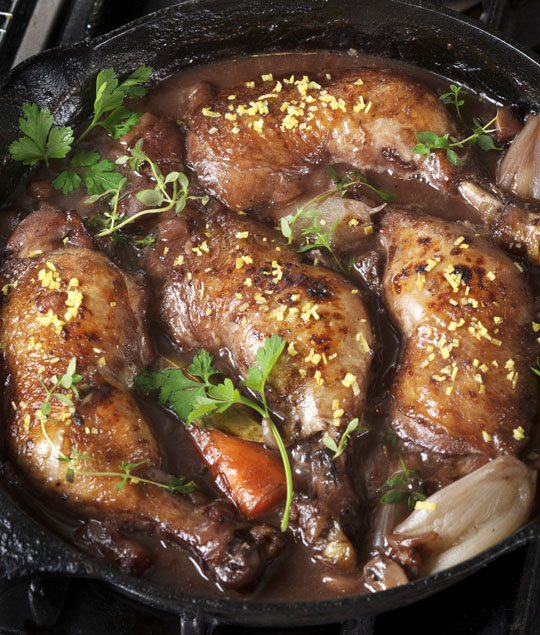 Wow, what an amazing glimpse into what people are eating.  A lot of stir fries, a lot of curries, pastas, pot roasts, and eggs, American and international.  There are so many ideas in the previous post I feel like I should do something with them, make them more accessible.

Of course, people who read this blog are people who care about food and who love to cook already. My goal has always been to encourage people who don’t cook, to know that cooking is not as difficult as people too often think it is.  All these great suggestions are more proof of this.

Thank you all for reading and posting and sharing your meals.

I’m currently in Key west cooking for a gang of sailors, big family meals, pots of beans and Carolina barbecue, a seafood spread of snapper ceviche and grilled mahi mahi tacos.  And tonight, duck confit, maybe some grilled duck breast, a salad of spicy greens, poached egg and baguettes toasted on the grill.

The below are just a random handful of meal ideas, amongst the hundreds, that caught our attention.

My go to meal is Quinoa. I will usually saute up some bacon, asparagus (or whatever veggie I have), yellow onion, and garlic in a separate pan. Then at the end I will add some toasted pine nuts and fresh basil (or whatever fresh herbs I have). Then mix it all together with the cooked quinoa. I usually top it with a dollop of sour cream or a fried egg.

I cook a total of three staple meals for my boyfriend (when its my turn to cook). Pot Roast in the Crock Pot: I take a nice chuck roast and season it heavily with season salt, kosher salt, pepper, and whatever else I see around that sounds good that day. I brown it in a skillet with a bit of oil, then dump it in the slow cooker with carrots, ½ an onion, and a bit of water or beef stock. I serve it with mashed potatoes and make a thicker gravy out of the juice.

Shrimp Pasta: Basic linguini or other thicker pasta. I sautee a pound of shrimp (peeled and deveined, salt and peppered) in some olive oil, butter, shallots, and garlic. Add a half cup of white wine (pino grigio tastes great) and the juice of one lemon. I add a bit of the liquid from cooking the pasta, toss and done in about 30 minutes.

We don’t really have a ‘go-to’ meal. What I do is cook almost all day on Sunday to prep for the entire week. For example, I cooked off cubed chicken thighs marinated in garlic, oregano, s&p, sherry vinegar and olive oil and steamed some potatoes. When it comes time to cook, I’ll re-heat the chicken in a little oil, sautee some greens (swiss chard and black cabbage) in some garlic and olive oil, put in the sliced cooked potatoes and some cracked olives – a Greek bubble and squeak if you will. Total time to table is like 20 minutes as it is all cooked. Had veg curry early in the week and having pasta in spinach sauce with white beans later in the week. 3 wholesome home cooked meals with about 5 hours on Sunday and 10-30 minutes a night from fridge to table.

It is always like this – have it prepped and ready to go in the fridge and all you have to do is add some heat, herbs and acid to get homecooked on the table in 20. Screw you RR, nothing from a jar.

I make hash topped with a fried egg! The one my family loves the most is Curried Chick Pea and Red Potato Hash (which is posted here:http://www.cuizoo.com/2009/07/01/curried-chick-pea-and-red-potato-hash/) … hashes are super easy, use up a bunch of leftovers and odds and ends, quick, and healthy. The Curried Hash has chick peas as the protein, but obviously it’s entirely flexible and you can use up that leftover chicken, pork, or steak too. The seasonings go every which way … sometimes it’s leftover chicken with barbecue sauce and corn in the hash, sometimes its leftover pork with soy sauce, lots of green onions, and Asian flavors, etc. But it’s always based on chopped potatoes, some onions, some protein, some distinct seasonings, topped with fresh herbs and a fried egg. We love it.

Our go-to meal: skirt steak tacos with caramelized onions. Only a handful of ingredients (skirt steak, chipotles, garlic, onions, tortillas), most of which we have on hand all the time. We make a marinade by blending the garlic and the chipotles en adobo. Let that sit on the steak for 15-20 minutes. Cook it quickly under a broiler, rest, cut against the grain. Meanwhile, caramelize a couple white onions. Serve it all with warm tortillas, good beer, and, if we’re feeling ambitious, homemade guacamole. It’s an awesome, simple meal.

Each week I cook a pot of beans in my bean pot seasoned with some salt at the end and tossed with a small amount of tomato salsa. This way I have a go to dish anytime the rest of the week. My favorite bean right now is a rebosero (from Ranch Gordo), a Mexican pinto bean. With these beans I can refry them with garlic and onion, or serve them as is as a side dish to chicken or steak. But my favorite quick comforting meal is to fry up some Mexican chorizo, add some diced potatoes, throw it all in with the beans. Top this soupy mixture with some queso fresco, and serve it with some corn tortillas and I am satisfied and happy. Adding a Mexican beer to drink on the side puts this dish over the top for comfort food.

Braised anything in 12” Griswold skillet: It could be chicken on the bone, beef short ribs or really any beef, country style rib (pork shoulder) maybe a lamb or venison shank directly from the freezer. It’s almost routine when I haven’t planned anything special. It starts with onions in oil and maybe some rough chopped garlic. Then I open a bottle of wine appropriate to drink and cook with, and pour a couple of glasses.

I add the herb, some combination of sage, rosemary, thyme for pork, chicken, lamb, or game, tarragon & rosemary for beef and I add fresh ground black pepper. If I’m adding dry beans I don’t use salt until they soften, otherwise I add salt also. I flour the meat lightly and place it in the skillet. If it is chicken on the bone it goes skin down and gets flipped once, any other meat gets tossed or rolled in the hot oil, herbs & onions. I throw in diced carrots and any other appropriate stewing vegetables that I have (turnip, winter squash, parsnip, celery). Usually, I’ll crumble in a small handful of the dried black trumpets which I always have on hand.

At this point I make a decision on where I’m going for the starch. It often has to do with how long the meat will need to braise and how much attention I want to give the meal. The starch needs to go in at the appropriate time, better later than earlier as it is worse to under braise the meat than to cook it a bit extra while finishing up the starch. My go-to is barley and wheat berries (45-50 minutes at least). I may add some fast-cooking (small) dry beans which will give me an hour or more, may add potatoes 30 – 40 minutes or so, maybe I’ll leave it brothy to go on a pasta (thick cut egg noodles) or add a quick-bread crust when it’s done and then throw the whole skillet in the oven for a bit. This decision usually requires another glass of wine.

Once I’ve committed to the final shape of the meal I deglaze the pan with the wine, ½ cup or so and add some stock or broth appropriate to the meat.

The skillet then goes to the back of the stove on medium-low flame until the meat is tender. If the meat is not covered with liquid I will cover the skillet, if the meat is submerged it doesn’t matter. It is stirred randomly. Depending on the meat it may be finished with the first bottle of wine, it may take an additional bottle.

When the meat is done I’ll add a little bit more of the herbs and salt and pepper if needed and it’s ready to eat.

Fried Chicken, white rice, gravy, lima beans with okra. My parents and sister were all born in South Carolina then moved to California before I was born. This is a meal from my childhood that I still eat on a regular basis. The fried chicken isn’t the frou-frou buttermilk coated stuff that is all the rage. Rather, bone-in, skin on chicken thighs are salted, dredged in flour seasoned with pepper and fried in a cast iron skillet until dark brown and crispy. The gravy is made with the toasty brown bits. But the meal isn’t complete without the lima beans and okra. The limas would be butter beans if I lived in the south, but frozen limas are all that are available to me. So the limas and frozen whole okra go into a pot of salted water and cook until the okra has given up some of its slime. The gravy and limas go on the rice and the chicken goes on the side. This is a great meal.

Pesole! Traditional green chile stew. Amazingly tasty, and has a lot of variations that can be used to save time.

Heat up a couple of quarts of chicken stock, and chop up 1 onion, 2 serranos, 2 jalepenos, and 2 cloves garlic. Also cube up 2 chicken breasts (no skin), and season liberally with your favorite chile, cumin, salt, pepper, thyme, cilantro, and mexican oregano. If you’ve got time, brown the chicken, then vegetables and garlic slightly in a pan with a bit of olive oil. Add to the pot along with canned green chile and canned hominy (drained). Simmer everyone together until the chicken is done. Squeeze with lime juice or hot sauce just before serving. Can also be served with tortilla chips.

Also, if you want to be a bit more authentic, cubed pork butt can be used in place of the chicken, but it will need to be simmered for about an hour before adding vegetables to become nice and tender.

15 minutes prep, 15 minutes simmering, and it’s ready to eat. It keeps wonderfully for leftovers, and freezes well too.