Ham, dry-cured for eight months, removed from bladder (this photo by iPhone, the ones below are by Donna)

On a recent trip to Charleston, SC, to promote Twenty, my first stop, thanks to a tweet from Ideas In Food was to the kitchen of Cypress, where chef Craig Deihl gave me a truly impressive tasting of his dry cured meats and sausages. Damn they were good—highly recommend you wonderful folks in Charleston stop in for a taste. One of the items he sliced for us he called "knuckle."

Now one of the hardest parts of understanding salumi is getting a handle on terminology. When I inquired further he used the Italian term, fiocco, which is a name for a boned portion of the ham (the other larger boned cut is called culatello). The above cut is from that same area of the ham, but what really matters to me is that there is a good proportion of fat relative to the meat in this part of the ham. Brian Polcyn and I will be covering all of this and more in our book, Salumi, which will be published in August (great cover, no?), a follow up to Charcuterie.

Last May, we bought a hog from an amish farmer who had no problem saving the bladder for me. Culatelli are traditionally sewn into bladders but government regs don't allow them to be sold.  I sewed the ham up in a bladder and tied it in the manner of a culatello. I hung it in a mini-fridge in which I set a pan of salt water and jury-rigged a foil trough beneath the freezer element to channel water that condensed on the freezer element back into the pan of water. The pan was about two inches high. I filled it with an inch of water. During the first months of hanging, the pan of water over flowed.

When I was ready to serve it, I soaked the ham in water for a day to loosen the bladder (above). 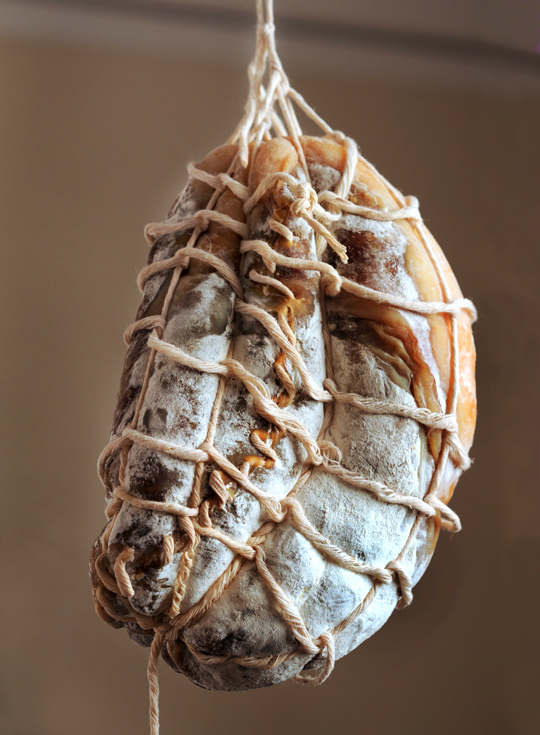 Ham in bladder after eight months, before soaking

I removed the bladder, rinsed and dried the ham. I wrapped it in a wine-soaked All-Strain cloth and refrigerated it. Two days later I sliced and served it.

The above ham had the deep rich flavor of the best prosciutto with just the right amount funk, the elusive taste of age. It reconfirmed for me how easy it is to cure whole muscles at home and the importance of sourcing well-raised, humanely slaughtered pig.

My post on a trip to Italy with Chef Polcyn doing research for Salumi.

If you liked this post on Cutetello, check out these other links: