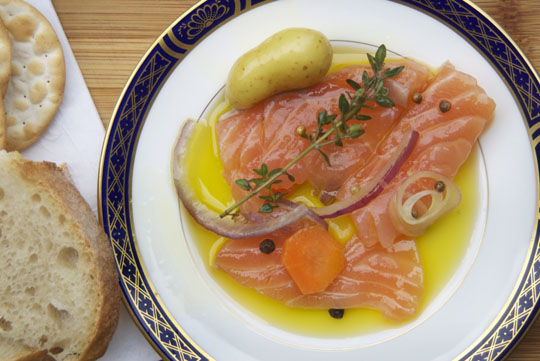 I've known of Dorie Greenspan for ages, author of numerous books, highly respected and well-liked in the food world, even has large group of blogs at Tuesdays with Dorie, dedicated to her book, Baking: From My Home To Yours.  But it wasn't till last fall at a BlogHer gathering did I get to see for myself what a sweetheart she is. She looks like and reads just like who she is, a genuine cook and wonderful spritely soul.

Last fall she published Around My French Table, an exquisite book of her favorite recipes (and a steal at $22 from Amazon—how do they do it?!). My dear friend Lee asked for and received this book for Christmas. When we had Lee and her husband Les over for that spatchcocked grilled turkey, Lee appeared with an hors d'oeuvres from Dorie's book. The light was right and Donna asked to shoot it. And Dorie was nice enough to send along the recipe. It was exactly as delicious as it looks in the picture.  Thanks, Dorie! 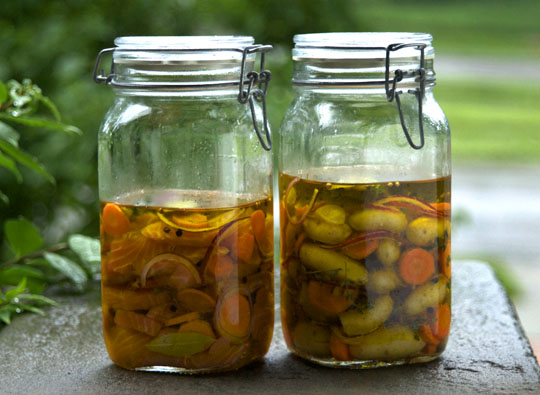 Salmon and Potatoes in a Jar

from Dorie Greenspan's Around My French Table: More Than 300 Recipes From My Home To Yours

Straddling a space between gravlax and tartare, this dish is a never-fail knockout, even when you serve it, as I often do, to savvy Parisians who know it’s a modern version of a humble bistro classic, herring and potatoes. Packed into canning jars or crocks, which look great when you bring them to the table, this is really two dishes in one: there are boiled potatoes marinated in aromatic oil and chunks of salmon cured in sugar and salt, just like gravlax, then marinated. The dish is simple in every way — the only cooking involves boiling the potatoes. But you must have patience, since you have to wait a day or two before you can dig in. However, the duo is always surprising, especially to people who know the original from restaurants; they’ll invariably give you cheers for serving something most people think can only be made by a chef.

The recipe will work with any cut of salmon, but it’s best (and looks best) if you use a piece cut from the thick center portion of the fillet. With a center cut, you can slice meaty chunks of salmon that will all cure evenly.

Finally, don’t be frightened by the amount of olive oil in the recipe — it’s a lot, but you won’t be eating it all. Although you need a large quantity of oil to cover both the salmon and potatoes, neither of them will absorb much. You can use the leftover potato oil to season or cook other vegetables or to make a vinaigrette, and the salmon oil to make a vinaigrette or even a mayonnaise for other fish dishes or salads.

Be prepared: You’ll need to start at least 1 day ahead.

Serving
I like to bring the jars to the table and pass them around with lemon or lime wedges — the salmon is nice with a squirt of juice — along with some rye, pumpernickel, or other dark bread and a hunk of butter. You could pass around a lightly dressed green salad too.

Roasted Cured Salmon. Rather than marinating the salt-sugar-cured salmon, you can roast it. The salmon will be firm on the outside, rosy pink and satiny inside. To serve 4, use 4 pieces of center-cut salmon fillet, each 5 to 6 ounces, and cure them for 12 to 18 hours in a mix of 3 tablespoons coarse salt and 2 tablespoons sugar. When you’re ready to cook the salmon, rinse the pieces well and pat them dry. Center a rack in the oven and preheat the oven to 425 degrees F. Put the salmon on a foil-lined baking sheet and roast for 5 to 7 minutes, or until a knife inserted into the fillets reveals flesh that is set but still very pink. Serve the salmon with a gloss of melted butter or olive oil and, if you’d like, a salsa (page 305), a mango chatini (page 489), some pesto (page 488), or a parsley coulis (page 76).

If you liked this post on salmon and potatoes in a jar, check out these other links: