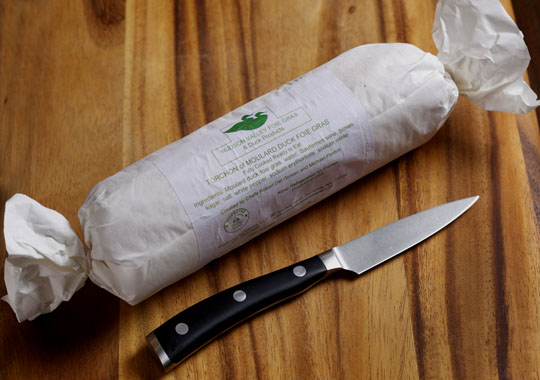 One of my favorite things on earth to eat is a well made foie gras torchon. It's a special preparation of foie gras, fat duck liver, that I first experienced at The French Laundry (the recipe is in The French Laundry Cookbook if you have it).  It's a three day procedure and brings out the very best in the foie gras when done right.  The duck liver is deveined, typically soaked in milk and salt to remove residual blood, then seasoned and, traditionally, rolled up in a kitchen towel (a torchon, in French), poached, rerolled to compact it and chilled. It's then eaten cold, a big fat slice of it, with some form of bread and a sweet-sour accompaniment.  The biggest producer of foie gras in the country, Hudson Valley Foie Gras, was making and selling its own, but ran into problems. I'm honored to have Bob del Grosso guest post on what happened after, in the first of what will now be three foie gras torchon posts.

By Bob Del Grosso, aka A Hunger Artist

I'd been blogging about the misdirected animal rights movement's efforts to ban foie gras (rather than putting their efforts toward ending chicken batteries or farrowing crates or any of the dozens of other nasty practices by moneyed industrial agribusinesses) since 2007.  In 2009, Hudson Valley Foie Gras manager Marcus Henley, invited me to see for myself how the ducks were raised and harvested. I gladly accepted and invited along Michael Pardus, a CIA chef-instructor and friend who lived nearby.

It was an exciting visit and confirmed for both me and Pardus HVFG’s excellent farming techniques and treatment of its ducks. (I work on a grassfed beef and dairy farm, so I know good, humane, farming practices when I see them.) After the visit, Marcus occasionally wrote or called to ask food production advice. Shortly after Christmas 2010, he called me about a problem he was having with the production of their foie gras au torchon, which they'd outsourced to another food production company. The torchons were developing large, unappealing pockets of fat.  He asked me if I could solve the problem.

I accepted and, missing my friend Pardus and believing he had access to hi-tech, slow-cook equipment at work, I asked if he wanted to join me.

Pardus was game, but unfortunately, he couldn’t get access to the high-tech equipment for an outside project. In fact this turned out to be a benefit.  The first thing we changed from HVFG’s production method was to use an immersion circulator (it was the cooking of foie gras that helped spur the development of sous vide cooking in the 1970s) and cook the torchon in a water bath. Not only would this form of cooking be less costly, but it would also solve the problem of the fat pockets. Because the new method required that the torchon be put in a bag and vacuum sealed, it created a much more compact liver and took care of the fat problem, no more bubbles of fat breaking out.

We were also asked to start from scratch regarding the recipe itself, the seasoning of the foie gras.  I proceeded in the same way I create all of my commercial recipes. After deciding on the method of preparation and determining how the seasoning will influence the physical properties of the main ingredient I did the following:

Each time I add a new ingredient to the dish, I smell it carefully to get a sense of how the aroma is coming together. I taste it for the basic tastes (sweet, sour, salt, bitter, umami, “heat”) of course, but mostly I rely on my sense of smell to know when a dish has been seasoned properly.  If I know the dish will be eaten cold, I usually add a little bit more seasoning than what I think smells and tastes right in the uncooked product. Conversely, if the dish is to be eaten hot I will record less seasoning than what might smell and taste right at room temperature or I will leave it as is.  Once I get to what I believe is the right aromatic and taste profile, I record the final weight of each ingredient and calculate the percentage of the main ingredient that each subordinate ingredient represents.

While I bought a terrific inexpensive FreshMealsSolutions sous vide machine to run my tests, Pardus, a true minimalist decided to cook his torchons in a pot on a stove top. He kept track of the temperature with an instant read thermometer and when it got too hot too fast, dropped it by bombing it with ice cubes. I’m not kidding—and when we used the same temperature and time regimen, he got the same results.

The torchon we finally arrived at, and which HVFG now sells (scroll down), is first brined with some curing salts to leach any residual blood (better flavor, more attractive) and seasoned very simply with good white pepper (Black pepper tastes better but would make the torchon look speckled), brown sugar, and a really good Sauternes that has lots of peach and grapefruit notes.

And that is the story of the birth of a torchon. 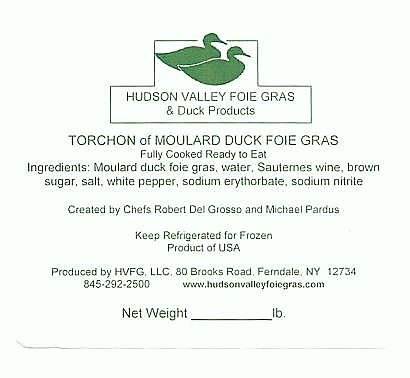 Thanks, Bob, and thanks HVFG for your consistently great products.  Bob, like any great chef, is a penny pincher by nature and so chose the most inexpensive temperature controlled water bath he could find; he also liked that he could use it in varying sized vessels.  Other options are the Sous Vide Supreme, which is great for home use.  The top of the line is the Poly Science Immersion circulator, which is what all restaurants should have and is what HVFG now uses to cook the Del Grosso/Pardus torchon.

If you liked this post on torchon, check out these other links: