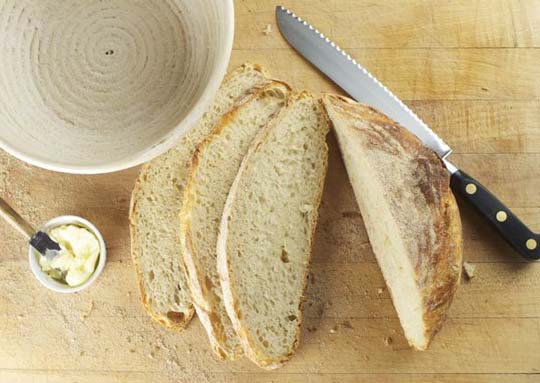 I recently posted on twitter that I don't believe in no-knead bread, the phenomenon started by Jim Lahey—chef of the excellent pizza restaurant Co., and owner of Sullivan St. Bakery in Manhattan, and author of My Bread—when Mark Bittman wrote about Lahey's no-knead technique in The New York Times. (Here's Lahey's no-knead bread recipe.)

After tweeting, I almost immediately received an email from Nick Fox, a New York Times Dining editor, perplexed. The next day Bittman DM'd me on Twitter asking why? Jeff Hertzberg, an author of the popular Artisan Bread in Five Minutes a Day, RT'd my comment, adding "Say it ain't so!" Not long after that the eminent author and Vogue columnist, Jeffrey Steingarten, in an unrelated email, asked me what I had against no-knead bread.

Time to address the issue.

The fact is I had only made no-knead bread once, from the Bittman column.  It was not notably attractive (my sourdough boule is as attractive as it gets in my kitchen). Nor was the flavor particularly noteworthy. What was spectacular, however, was the flavor and texture of the crust. Lahey had come up with the idea of baking bread in a cast iron enamel Dutch oven. Enclosing the wet dough in such a confined space mimicked the effects of a steam injection oven by trapping the moisture released by the dough. I don't know the physical reason this results in amazing crust but it does.

This is the revolutionary discovery that should forever elevate the quantity of homemade bread.

My one and only loaf was insipid, but my beef with the technique was ideological. What was so great about not kneading bread?  I like to knead bread.  Ten minutes spent kneading, either by hand or warming my hands on my dutiful Kitchen Aid mixer while it worked away, allowed time for unhurried reflection.

Moreover though, wasn't this whole no-knead business a tacit suggestion that we'd all be making bread on a regular basis if it weren't so difficult?  Now, the no-knead advocates were in effect telling us, we've figured out a trick to make it easy for you, you helpless wannabe. Real bread is too hard, too complex, too difficult to make at home. Here's a way around those mountains, once insurmountable by you little helpless home cooks.

Nonsense. Bread at home is easy and if you want to make it, mix five parts flour with three parts water by weight, add a couple big pinches of yeast and salt, mix till elastic, let rise, knead, shape, rise, bake.

I told Nick Fox this and he mainly agreed, disarming me completely by saying the no-knead bread wasn't necessarily easier; it involved more steps and certainly took more time, but that it did result in an especially tasty loaf of bread.

I'd had a similar back-and-forth with Hertzberg.  He directed me to the recipe on their site, artisanbreadinfive, telling me to ignore the aside about fresh yeast and use dry yeast. What I love about his technique is that you mix up a batch of dough then keep it refrigerated, even for a week or two, cutting off a piece when ever you want bread.  You can have bread on the table two hours after wanting it. My first effort was disappointing, flat, shapeless, unlovely, but the crumb was not bad. A couple days later, having not touched the remaining dough, I did it again, and the results were excellent.

When Steingarten wrote to me that he makes his version of Lahey's bread a couple times a week, I asked for his recipe, which he dutifully sent along. I've revised it a little and put the flour into weights rather than volume. Steingarten uses spelt flour on the cutting board in the proofing basket, which I recommend for flavor and appearance; Lahey uses bran and no proofing basket. This is up to you. I recommend proofing it in a banneton if you have one or a bowl lined with a cloth napkin heavily dusted with flour or bran.

The following bread is indeed very flavorful, requires very little effort and 24 hours from mixing to baking. (If using grams, stick with grams; if using ounces, use ounces don't use the ounces of water and grams of flour as they're slightly different.)

This makes one delicious loaf of no-knead bread.

If you liked this post on no-knead bread recipes, check out these other posts: