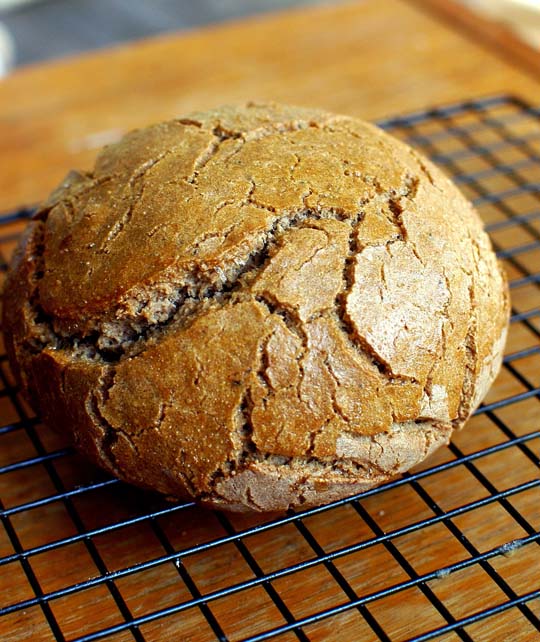 I've been fascinated with gluten-free bread recipes because they attempt to do what shouldn't be possible: create a network of pliable solids that can expand and trap gas released by yeast, giving you a leavened bread without gluten. It's also invariably a good-for-you loaf, with a rich variety of grains. Shauna Ahern, aka gluten-free girl, author of her the eponymous book and recently Gluten Free Girl and the Chef with husband Daniel, is among the best and has developed this seriously good gluten-free loaf for my bread-baking month. (There will be one more bread baking post; I know, it's February, but who cares. Bread is Life. Remember these awesome rolls.) Celiac is a very real intolerance to the main proteins in flour (and soy sauce and many many other things, see frank conversation with Carol Blymire on it's effects). I'm delighted cooks such as Shauna are inventing ways around it. (Maybe one day soon, we'll have a cure for it, as this USA Today story suggests we're headed for.)—M.R.

The first years after I had to give up gluten, I turned away from photographs of crusty bread and piles of pasta.  Why make myself miserable by focusing on what I could no longer experience? I ate my sautéed chard, pulled pork, and white cheddar with pleasure.  I turned away from the rest.

Now, however, after learning how to work with gluten-free flours and make mistakes in the kitchen and take notes about what didn’t work, I look at photos of crusty bread and think, “Bring it on.”  I can make that.  In fact, I will.

So when Michael posted this recipe for a multi-grain boule, and called for us all to make more bread this winter, I scrutinized his ratios and walked into the kitchen.  A few attempts later, I was out on the porch, taking photos of this boule, warm from the oven.  A warm boule made without any gluten.

Now let me remind you of this: there is no substitute for gluten.  Gliaden and glutenin combine forces to create elastic binding in doughs that I will never achieve, no matter how many different flours and slurries and starches I try.  Those of you who can eat gluten?  Please start baking bread.  You have it so easy.  Go.

However, I might not achieve the same air pockets or mile-high rising of dough, but I still want great bread.  And this is great bread.  It’s mostly made of whole grains: teff, oats, and buckwheat.  (Those of us with celiac, like me, can only eat certified gluten-free oats, so please be aware of that before making this for your friends.)  The almond flour adds a great nuttiness and some fat.  The arrowroot and potato starch help lighten and bind the dough.  The eggs enrich the bread and help keep the crumb soft, along with the milk powder.

The taste?  Hearty and grainy, but not gritty.  As my husband says, "it tastes healthy, in the good way".  There’s a kind of dark intensity to it, like a European bread, which tend to be denser than American breads.  It’s like a rye bread, but without the rye.  The texture of the crumb is soft and pliable.  The crust has a crunch.

Let’s put it this way.  Those rolls you see below didn’t last long after I took that photo.

Makes 2 small boules or 8 rolls
If you are new to gluten-free, some of these ingredients will feel unfamiliar.  Don’t worry.  They’re good.  Almond flour, teff flour, oat flour, and buckwheat are simply great grains that everyone should be playing with in their breads.  When you bake gluten-free, you have to combine flours for the best taste and texture.

What might seem odd here is the gel-like slurry you make with the flaxseed and chia seeds.  Most gluten-free baked goods recipes call for xanthan and guar gum, hydrocolloids that bind the dough and mimic some of the effects of gluten.  However, I have recently discovered that neither ingredient does great things for my digestion.  So, I have had to cut them out. 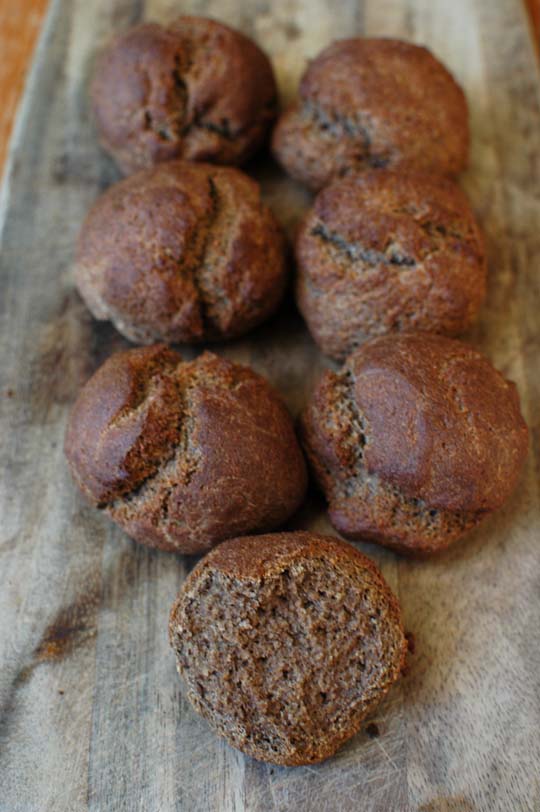