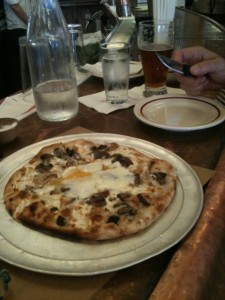 What began as a Bourdain initiated boondoggle turned into a great break in NYC for me and Donna with several restaurants I’d been eager to try.

We arrived early, unloaded our bags at the most excellent Ace hotel (I highly recommend), then headed south to Balthazar, where we had hoped to get some breakfast—love their shirred eggs; it's the perfect way to enter the city.  Alas, closed for renovations!

The young ladies posted at the door to preserve customers sent us several blocks east to Bowery and Houston to the McNally’s pizza joint, Pulino’s, where we had our eggs, on pizza. (Why eggs on pizza aren’t more common, I have no idea; want to try it? Here's a recipe.)  We’d just taken a seat at the bar when the chef, Nate Appleman, strolled in and stopped to chat.  After the Balthazar disappointment, Pulino’s, blessedly cool and uncrowded at that hour, made NYC feel hopeful and welcoming.  It concluded with some excellent house-cured beef salami. 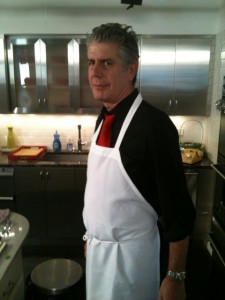 Would you trust this man in your kitchen?

We then wandered farther east to see Jamie Tiampo’s Seefood Media studio.  I met Jamie at a few food writer gatherings recently, admire his work for eattv.com and wanted to see his digs (here's the youtube of his exploration into a pair of Virginia oyster farmers). He’s invested heavily in film equipment, is internet savvy and forward thinking, and he left a certain career as a long term mid- to upperlevel manager for IBM to pursue work he cares about.  His most recent project was photographing Sara Mouton’s new book, Everyday Family Dinners.

We then headed to The Little Owl, a charming shoebox of a restaurant in the west Village, for brunch with the Ratio App developer and his wife, then strolled down to Murray’s Cheese. We were actually considering buying a baby gift for a friend but figured the newborn’s parents would prefer some fine cheese and wine rather than a onesie.  But we found a onesie as well, with the word “stinky” emblazoned on the front, so we considered it something of a bonanza. 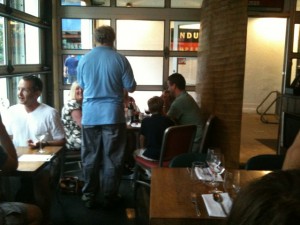 The man in the blue Izod? One of the country's best and most influential chefs. Who can name him? (Answer below.)

This was followed by a much desired nap before we headed out into the sultry night for a dinner at Momofuku Ko, where we were one of a handful of deuces seated on stools at the bar (I sat next to a woman who requested that she be served no pork, which doesn't really seem in the spirit of a David Chang restaurant).  No menu, the cooks just cook and serve, and that’s a big part of the fun, never knowing what's coming. 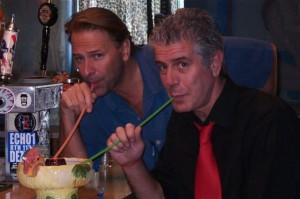 Soft in the head? Still too early to tell.

Tuesday, I was up and out early to join the zero point zero crew for the filming of surely one of the more bizarre premises for a Bourdain No Reservations episode.  A holiday show.  I cannot tell you which holiday and I can’t tell you why I can’t tell you. Suffice it to say that I learned Tony can actually cook—though it's not always a safe event to witness up close—and he also revealed a bizarre, and ultimately convincing, affection for tiki bars.

It was part of the unusual good nature of this trip that after braving a day in the kitchen with Bourdain, the town car spilled me out in front of the Ace Hotel, and there, seated on the steps next door, in whites and apron, was none other than the beautiful April Bloomfield, hands down, one of New York City's best cooks.  She of course is the chef of The Breslin, which adjoins the Ace (yet another reason to book rooms there, especially if it's 102 degrees and you don't want to melt between cool hotel room and cool bar; again, highly recommended for drinks and food; fabulous airy light goat cheese tart and a perfect Caesar with delicious anchovy croutons; April! Never stop cooking!). 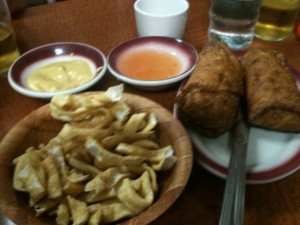 So much can be packed into three days in NYC, too much for a single blog post. Dinner at The Standard with Bourdain and the smoking hot Fascist (truly delicious caviar and oysters), down to Hop Kee for some egg rolls from my youth, and around the corner, some of the best fried dumplings in the city (ask Amateur Gourmet for directions).

And a concluding meal with Donna and her two stellar neices, Linden and Lily, at Barbutto, a lively casual spot in the meat packing district run by Chef Jonathan Waxman, pictured above.  What I love about this photo? Here's one of the pioneers of the new California/American cuisine in the 1970s, Chez Panisse chef who went on to open Michael's in Santa Monica, then Jams, one of the least heralded chefs in our age of over-celebrified chef culture and yet one of the most influential and important—manning the reso book at the front door and taking orders on a Wednesday night in July.

And after Barbutto, we strolled to Pastis, where Linden works, for festive gin fizzes, a perfect book end to a great, quick NYC romp, having begun at a McNally restaurant and concluding at a different one. If Cleveland has any faults, one of them is that it doesn't have a restaurant by Keith McNally.

I used to think a proper goal would be a sugar shack on some secluded beach in the West Indies. I think a pied a terre in New York City is the current desire. God, it's a fun place to be. Thank you, Donna! 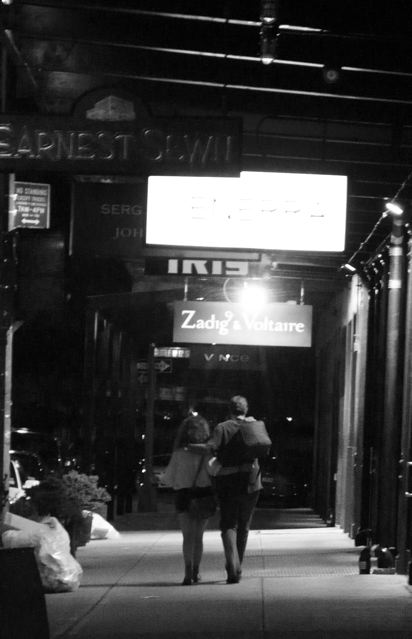